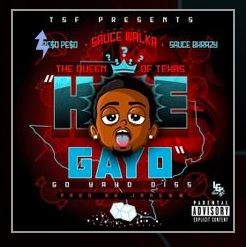 [Verse 1: Peso Peso]
Run in your spot, you get popped on the couch
Twenty thousand on my wrist, I let my watch hit the house
F&N on my hip when I’m walking around
I’m at your local corner store, I’m tryna air a nigga out

Glock 30 in my LV jacket
That nigga walk back breaking bitches and I’m backtracking
One of my smokers bought a fifty wrapper, he don’t want no plastic
I made that bitch give me another drop and now I’m at his attic

They know who he with on the sly, I got too many dimes
These niggas rappin’ like they gangsta, man I know these niggas lyin’
Niggas acting like they on the block, we know that they inside
I broke a bitch and fucked her homеgirl, now that hoe is crying

Ain’t nobody in the Sauce gon’ diе, not never
We gon’ stay rich, drippin’ on a bitch, that’s forever
I used to ship the packs, now I’m on the plane ’cause it’s better
Bitch, you folded with your gun, nigga how is you a stepper?

I got a new F&N and gave my lil bro the Beretta
I can post up and sell drugs anywhere in Texas
My nigga Walk hates Percs, I don’t care what he think
Can somebody please tell him that it’s just like drank?

You get shot with a Drac’ if a nigga act jank
How you the king of Texas? You got sugar in your tank

[Verse 2: Sauce Bhrazy]
I just dropped some [?] in the pop, that bitch muddy as fuck
Yellow diamonds bussin’ in my mouth make you put your shit up
Sneak dissing on the ‘gram but you hiding, you know where it’s up
Take him to the North, send some glue with him, watch he get stuck

Break on a nigga bitch with a suit and tie, I’m a businessman
Extended my arm, she put the money in the palm of my hand
TSF been ballin’ while y’all lame ass niggas in the stands
I’m with Lil Boosie, he’ll pull a choppa, make a nigga funny dance

Red beam on his ass make him move like he got ants in his pants
We just got the drop, we gon’ spin it again and again
Pull over to the side, let the chop stick catch in this wind
Let him think it’s cool, now shit come and we gon spin again

Just got off the phone with Scuba, we was talkin’ bout killin slimes
.223s and F&Ns, that shit really be on our minds
I can’t beef with you, you broke boy, you a waste of time
The gas pack yelling too loud, I had to cut that bitch down

[Verse 3: Sauce Walka]
Boy, I heard your bitch got them cooties, can’t touch that now
Nigga had a chain for three years, ain’t bust that down
Nigga got a million views and still use Ubers now
How is you a king but you can’t come out your house?

How is you a king but you ain’t even got no house?
Nigga watches TV on the wall but ain’t got no couch
Know your feet hurt from doing all that standing
Lil buddy wildin’ out, and he is not Nick Cannon

I been driving up and down 45 one-handed
Punching bitch niggas down ’cause they sweet like candy
Before you get your glass cracked like Spongebob, like Sandy
Go get your fuckin’ chains back before they be in Miami

It’s a goddamn shame, what you did to Lil Brandi
And I hope his family can recover and gain some understanding
We ain’t smokin’ on no niggas, that shit childish and mannish
And we ain’t claim nobody work that ain’t none our planning

Where was all them thookas then? Where was all them cannons?
When you pulled out that carwash and them blows start fanning
All your bitch ass did was scream, cry, and panic
You didn’t play your cards right, cuz, not no gambit

Stop tryna use everybody for your shield from damage
You lil dirty ass nigga, you like a real mechanic
But you ain’t got no car – how that feel to manage?
Bitch ass fell off – sit still and stand it

Every time I call Bugatti, he pulled up and ran it
I tried to set y’all up some fights, you started talkin’ Spanish
Always pokin’ out your tongue – is you Marilyn Manson?
Everything you do is cheap in them flea mart pants, and

Now you wanna beef with Texas ’cause that shit ain’t jammin’
Man, I thought you was the damnit man, I guess not, goddamnit
Now let me tell these folks a truth, now all that goddamn scramblin’
You been hating on Kenny Lou since Out Gang started slammin’

You heard his verse and you was cursed – you could just not stand it
You asked to feature twenty times, I knew that you couldn’t handle it
Since then, you been acting like a bitch with a pamphlet
Started greets with your peeps, wanted media attend it

But when I met them niggas with you, it was happy and splendid
The way you niggas switch so fast, to me, is really tremendous
The way I seen you switch on family made me look at you different
And every nigga that you reppin’ beef with still living

What did you say to that mother as she buried her children?
Did you lie and say you got her when you make you a million?
And your baby mama wack, that bitch need a Brazilian
We all know in Cali, you ain’t a Crip, you a civilian

That’s why they took your ass down, for your chains and your bandana
You ain’t gon’ do shit but dipset Lil Santana
Where was I, your fuckin’ clip set?
Lil Santana still got every chain I brought in, where’s a lie scanner?

Dog collar, splashy Dove mar your head
TSF with big boogers, your whole catalog’s bread
You will never be ahead, we all know that you was scared
You probably don’t even know Lil Zek, stop lyin’ on that man

Hoe Gayo got robbed on Rodeo
Mexicans ran off with his chain, we hoard the yayo