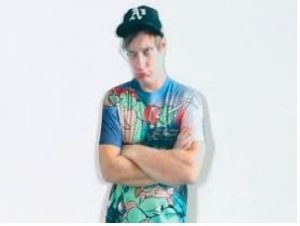 [Intro]
{You’re on the air, hello}
Area, Area 51
{Were you an employee or are you now?}
Uh I, a former employee {former employee}
I was let go on a medical discharge about a week ago
Umm Dave, I don’t know where to start
They’re uh, uhh… they’re gonna, um
They’ll triangulate on this position really really soon

I landed in the forest in a ’94 Taurus
Two thousand light years from my planet Lars Horris
Came dizzy out the craft, head spinning, legs akimbo
MC phoned home but couldn’t get a signal
Lost on Earth with a broken hovercraft
a head full of raps, and a super rough draft
of a Reason 4.0 beat that I couldn’t finish
Quit it for a minute, still in the game to win it
Your brother knows me, he saw me on the news
The FBI is sweating, the cults all say it’s true
Before I landed in your city and I started melting faces
I was up on Cygnus, working on my spaceship
Earth is not my home but I guess I’ll stay
I really couldn’t find a Martian sublet anyway
Back with a ginormous space laser on my back
with my finger on the trigger, city setting set to flat

You don’t know me from Adam, Xenu or Bender
E.T. or Weezy or Roger, remember
Just like a giant octopus I got for your esophagus
I’ve kicked it with Egyptians and I’ve chilled in a sarcophagus
Stonehenge, Roswell, the Aztecs, the Mayans
Crop circles, cattle mutilations, Easter Island
That was me (HOLLA!) But I don’t regret it
They sold a lot of tabloids now it’s out because I said it
Don’t let it get to you, because I ate your goldfish
Cause I burned your house down, took your cat and sold it
This is hardcore alien hip-hop
Goin on 10 years, not about to stop
Watch the Milky Way collapse like a Carl Sagan nightmare
Stephen Hawking’s texting me I’m floating like Buzz Lightyear
To infinity, beyond and back, bought the t-shirt
Got Wall-E in my rearview telling me his knees hurt
What?! No we didn’t have sex!
Wall-E’s a robot so we can’t have sex!

[radio show nutjob]
Umm, okay, well what we’re thinking of
as as aliens are, there, uhh, there extra-dimension beings
that an earlier precursor of the space program made contact with
Uhh, they they are not what they claim to be
Uhh, they have infiltrated a lot of uhh, uhh
Uh a lot of aspects of of the military establishment
Particularly the Area 51, uhh
The disasters that are coming, they, ah uhhh
The militar – uhh, I’m sorry
The government knows about them
And, there’s a lot of safe areas in this world that
they could begin, moving the population to, NOW