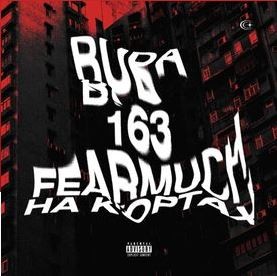 [Verse 1: OG Buda & 163ONMYNECK ]
Hey, wrapped a bandana to my chopper (tu-tu-tu)
These oppas are food, I brewed them like a doshik (yum-yum)
I smoke a penny a day, my mother says I lived (fuck up)
I’m a shameless fellow, threw my conscience from the balcony (tr-r)

I walk on Ulke, I swear, I put it on the passers-by (I put it) I
cut the hash, snapped a couple of buns on the knife (y)
They poured three thousand on the release, like Andre (Andre)
Chomp my pussy, it tastes good to me, like a gourmet (le t’s go)

Mom said as a child I will not become anyone (not true)
We put five-star bitches on the courts here (I)
We smoked them, now they want to puke here
We enter one bitch in a crowd, call the brigade

Ah, I brought a shit like Pakhom (eat) This
lips bitches smell my groin
Didn’t want her pussi, I enjoy my mouth (whai)
I have as much iron as scrap metal (pow)
Your mom goes

quietly to a male striptease (oh) Lies to his father, like she goes with her friends for a walk (bitch)
This couple is the time to divorce
guess the password on the card, this sector prize
makes this easy

I merged this bitch like tracks Big Shmouk
Doebalsya to your kids as a redneck
send fifth Sonya your kid in jail
In jail my boys sit, REST in peace of Kenzo
have I have a lot of gear from its brand

Kicked off the dope out of the window, call bando
trap house ladder house, y, y
Hey, wrapped a bandanna on his chopper (the pow)
cut down the resolution, everything legal on the docks (really)

I really OG content, not as Loco Rocka (ha)
Threw half of it and washed it down with some juice
Ha-ah, this shit is easy, fuck
1-6-3, Lil Buda

[Verse 2: FEARMUCH]
Okay, let’s get it
Fearmuch big dog , chained like a loco
Smoldering big smoke, near treinta ocho
Boy, who are you? Don’t go here at night
Trigger finger itchin on nerves

Calm down the talent, rapper under the salts
Your types gas with the garbage
Accepted with a chicket, merged everyone with giblets
Who of you is a snitch, figure it out yourself

came in The time has come to the end
But I don’t give a fuck who’s what
I decided to gas here
I took out my treinta ocho
And decided to perform here, brrrr