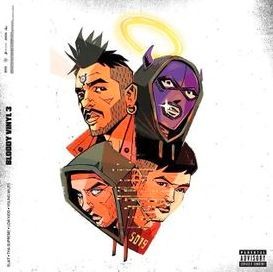 [Verse: Lazza]
Ok
I come from where nobody fucks if you’re on two posters (No)
I know who for money punches your forehead at Kennedy, what would you say?
I’m not satisfied, not even if he comes to bring me the moon is enough
Work 8 out of 7, I spend your year on a vacation
They want the feat, goddamn
I don’t have the Beats by Dre
They ask: “Do you eat this?”
I answer: “SIAE”
I know you’re not hungry anymore
But

you taste a 100-piece meat She’s on me with a hundred messages
She wants to jerk me off like in a massage center
Hey,save your breath for the soup
I have no respect for the administrator
Pile of money, tеsta dip
Bloody Vinyl volume 3

Between ‘we are the code, the Hagakure
Zzala does not even fall under torture I climb
the charts, no harnesses
Between you you are the number one of nothing
Disco of the year on December 31st

They say I’m no longer double H
I spend two K’s in two Hermes’
belts I respect who makes a song and buys a house from nothing, which is not bad
And rather than ad- , I swear I’d give the word to my dog
Brr